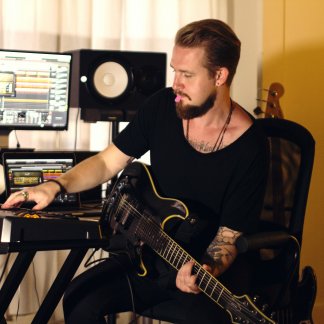 Recent successes include sessions and releases with artists such as Elliphant, Shel Bee, Ripsy May, TVÅ, Simon Zion, Brookfield, Mapei and Casey Cook. He has over two millions views on his personal YouTube-page (/vudvuzela) and over 800 million total views due to cross promotion with YouTube-channels such as Sp4zie and Keralis. He has also had success in the film and TV-industry with the independently released song ”Underwater,” which was featured in the TBS-show ”Search Party.” Many more international TV-syncs (ESPN XGames, TBS, etc) are due to come out before the end of 2017.

Whether you’d like to book an in-person studio session or work remotely, Vud can offer a number of services to make your song rise to it’s fullest potential and really shine. Send your demo and a short introduction today for current rates.
Production, Songwrite and Mix-reel (Fall 2017)
0:00
0:00
7 likes
343 plays
Private Gig 5 years ago

shel_bee said...
"VUD IS THE BEST!! He is the producer I work with the most because I love his sound and his skills! Working with him has really transformed my music and brought me up to a professional level. The best part is he can mix and master too, so it's a one stop shop for a finished product. I will definitely work with Vud again!!"
5 stars