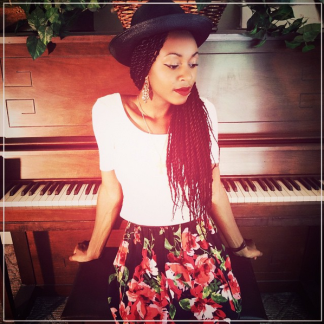 I’m a singer/songwriter, and would love to lend my vocals to your projects. I have released three EPs, and generally characterize my music as Neo-soul and Jazz, with some Reggae influences. My style has been likened to India Arie, Norah Jones, and Corinne Bailey Rae. I love collaborating with gifted, passionate artists. I’m currently preparing to record a new album, featuring artists from several different countries. I’m a senior at Dartmouth, and plan to pursue a Masters in Music after completing undergrad. Looking forward to connecting!

BIO:
Tyné Angela is a singer/songwriter currently attending Dartmouth College. Over the years, she has performed at such renowned venues as the Kennedy Center, Rodney Jerkins Studios, and the Los Angeles El Rey. Her endeavors have earned features in Seventeen Magazine and Urban Cusp.

At Dartmouth, Tyné has been the recipient of numerous arts awards, including the Peter D. Smith Arts Grant and the Eric Kunich Arts Award. Most recently, she was awarded a Senior Fellowship. As a Fellow, she will spend her upcoming senior year recording a collaborative album. The work will feature artists from countries throughout the African continent and diaspora.

Tyné was honored as a 2013 National YoungArts Finalist, and is also an alum of the Grammy Foundation’s GRAMMY Camp™. She was commissioned by the Grammy Foundation to co-write the theme for their 2015 holiday campaign. This past spring, Tyné was afforded the amazing opportunity to tour in Cuba with the Barbary Coast Jazz Ensemble. She has also used her music to benefit a variety of causes she cares about, most recently recording a charity album in support of the Global Village Project, a school in Georgia for adolescent-aged refugee girls.

At Dartmouth, Tyné serves as the lead vocalist for the Barbary Coast, sings in an a Cappella group, and leads worship. She is passionate about crafting quality music that inspires genuine, empathetic connection.
"Fool That I Am" (Etta James Cover)
0:00
0:00
1 like
24 plays