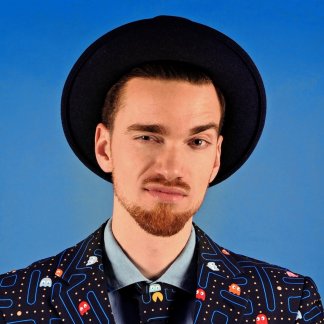 Lucerne, Switzerland
Asesina
0:00
0:00
7 likes
195 plays
Member Since: October 13, 2020
Studio Access: YES
Gender: MALE
Country: Switzerland
Microphone: Slate Digital ML1
Genres: Languages:
Sounds Like: Alex Band 1 Khalid 0 Billie Eilish 0 LORDE 1 Example 0
Vocal Styles: Choir 0 Pop Divo 0 Rock 1
Vocal Characteristic: Crisp 1 Deep 0 Low 0 Raspy 1 Strong 2
You’re wondering who’s «Lerocque»? Take the blue pill and I'll tell you the short story: A tireless vocalist with no fear of musical genre boundaries. You wanna have an in-depth look? Go for it! Here comes the red pill: «Lerocque» was born as Pedro Rodrigues in Portugal and emigrated in the 90s with his parents to Switzerland. A cheerful, incurable optimist who always needed to tag any family photo with his middle finger.
As an immigrant family with three children, both parents had to work hard so the kids had a chance for a better life. That's why Pedro spent a lot of time in front of the telly - in the Disney worlds of «The Lion King» and «Star Wars», as well as in the virtual universes of «Zelda» and «Final Fantasy». Guess what made him so enthusiastic about it? It was the music. She touched him deep. The musical seed began to germinate. But the now implanted dream took a little longer to root in the body of a slightly chubby pot. Years later, after the failed attempt to found a zoo with small animals (please don’t ask any questions), he decided to look for a band and found «One Day Remains» via online ad. The will was strong, the wallet empty, which is why Pedro made some steps on wrong ways for a little while to scrape together the coal for the recording studio. Incidentally, he also got to know his future wife in on these ways. She was one of the victims – nevermind. What must be, must be. But despite the fulfilling role as lead singer of a band, he always had the desire of something completely own: Something intoxicating and ultra-cool.
However, there was one problem: The gaming taught him the English language but not how to play an instrument, so he got a producer on board which turned to his personal Mr. Miyagi in the arts of songwriting - Matthias Hillebrand-Gonzalez. Speaking of water: Although Pedro probably would like to write his songs on one of the Jupiter moons, he finds his greatest inspiration as a diver under water. In this sound-deadened environment, he’s not only surrounded by water and colorful fish, but also by song ideas.
Together, they write those unmistakable and compelling songs that everyone can relate to. They tell these small and big life-written stories, without being too shy to drop their trousers. Sometimes nerdy, sometimes a little off-hook, but always 100% «Lerocque». Why this name you asked? He was victorious in several MMORPG battles with this name. Never change a winning team!
Asesina
0:00
0:00
7 likes
195 plays
Need male vocalist for dance song 2 years ago

JacobBarley said...
"Lerocque has a very unique voice, he delivered exactly what I needed on the first take, fast turn around, would definitely work with him again! Thank you Lerocque!"
5 stars