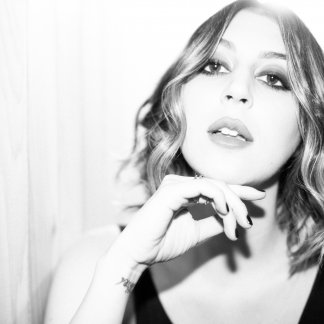 
Jessie Poland is an artist and songwriter best known for her work as Charlotte Sometimes and, most recently, LACES. Her debut album, "Waves and The Both of Us" was released on Geffen Records in the Spring of 2008, earning rave reviews en route to the top ten of iTunes, as well as recognition as one of VH1's “You Oughta Know” artists and one of Alternative Press' "100 Bands You Need To Know." In 2012, following extensive tours with such renowned artists as Gavin Degraw, We The Kings, Train's Pat Monahan, and Butch Walker, Jessie earned a spot amongst the 24 finalists on Season Two of NBC’s "The Voice," wowing the reality competition's four judges — all of whom turned their chairs around based on the sheer power, grace and uniqueness of Jessie's voice.

Jessie's talent, creativity, individuality and cutting edge cool has since lead her down new, uncharted roads. She wrote Cole Plante's (HOLLYWOOD RECORDS) 2014 hit single "Before I'm Yours" (Sirius BPM #1), was coronated as the "Official Host and Blogger" for ROK Mobile and, most recently, unveiled LACES, a Pop project produced by Grammy Award winner Dante Jones and One Direction/Shawn Mendes songwriter Teddy Geiger.

yeeeyman said...
"First payment of to, for this track."
5 stars