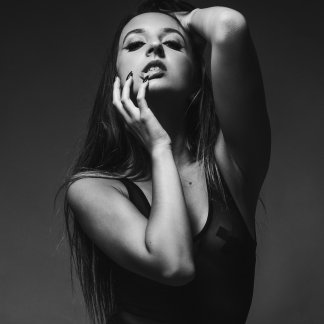 Easton, United States
Variety of my songs and what I can sing.
0:00
0:00
11 likes
341 plays
Member Since: January 23, 2019
Studio Access: YES
Vocalist Fee: $300
Gender: FEMALE
Country: United States
Microphone: Neumann TLM 103 mic
Genres: Languages:
Sounds Like: Lady Gaga 0 Miley Cyrus 0 Sia 1 P!nk 0
Vocal Styles: Pop Diva 1 A Capella 0 Rock 0
Vocal Characteristic: Deep 0 High 1 Silky 0 Smooth 0 Strong 1 Crisp 0 Low 0
Jamie LeRose is an up and coming female pop singer, on a rise to the top with her powerful, stylistic vocals, charismatic performance and inspiring life story. She is trained by the number one signing coach in the world, Don Lawrence. Massively influenced by Lady Gaga, the now 18 year old singer began performing when she was just three years of age. Often being teased by the other kids for her love of music, Jamie has continue to persevere in her goals to become a famous singer. Now working with some of the biggest names in the industry and following the release of her debut single ‘Fame’. Jamie LeRose is a name the world is going to be seeing a lot more of very soon.

Above is a mix of some of Jamie’s original music! There are many not included in that mix. If you’d like to hear more, message her. Her songs range from pop, to pop rock, to r&b, to electronic. But she is very fluid when it comes to writing and can write whatever genre you desire. Her vocal range ranges from very to high, to very low, and she can change her voice, to the best of her ability, to match the style of voice/music that your'e looking for.
Variety of my songs and what I can sing.
0:00
0:00
11 likes
341 plays
Feel good track need vocal 3 years ago

yan said...
"Sometimes a collab don't work ,like now,different styles of music;jamie Lerose need a sort of Lady Gaga track,and this is now at the moment totally out of my comfort zone.i believe she must get a opportunity to work with a producer that's make this sort of tracks"
5 stars