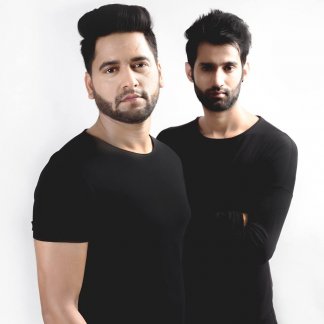 Progressive Brothers have Dj'ed at India's biggest festivals like Sunburn, Vh1 Supersonic, Holiguns Music Festival, EDMonk Festival, Burnout Festival, Sun & Moon Festival etc. They have shared the stage and played alongside David Guetta , R3HAB, Carnage, Nari & Milani, Above & Beyond, Steve Aoki, Benny Benassi, Dada Life, Moguai , Mat Zo, Alvaro, Funkagenda, Swanky Tunes, Seven Lions, Daddy's Groove, Felix Cartel, Syn Cole, Max Graham, Protoculture, Myon & Shane54, Andy Duguid etc. Progressive Brother's creativity during their live sets is class apart where they play 150+ tracks in a 2 hour set ! comprising of ‘Big room sound’. Their set features a cocktail of Progressive/Electro House, mixed up with Trap & Hard Style.
Progressive Brother's debut track ‘Veda’ in collaboration with legendary Dj ‘Richard Durand’, got signed on Tiesto's founded Black Hole Recordings. The track was released in the album ‘Richard Durand vs The world’ with Tydi, Paul Oakenfold, Heatbeat, Protoculture, Bobina, Pedro Del Mar and many more.
They quickly followed it up with their next 2 releases, which were remixes for Andy Duguid and Julie Thompson's single ‘Skin & Bones’ and Moonbeam and Polina Griffith's single 'I Go On' which got featured in some of the biggest radio stations in the world like Black Hole Radio, Digitally Imported, Kiss FM, Dance Paradise etc. Their next single 'Turn up the Bass' was picked up by SaReGaMa Music (HMV) and got released on leading music portals in India and was widely appreciated. They have also featured on compilations ‘Trance-Central 003’, ‘Amsterdam Dance Essentials’ along with some Top Djs from Dj Mag Top 100 such as Cosmic Gate, Stoneface and Terminal, Arnej, Sied Van Riel, Orjan Nilsen, Alex Kunnari, Pulser, Alex O’rion and other prominent Djs/Producers in the world. They are popularly nick named as 'Mashup Masters' after the release of Progressive Brothers Bootleg Pack 1 & 2 featuring more than 200 smashing tracks from the biggest djs around the world. They frequently give away their bootlegs/remixes/edits as free gift to connect with their fans on all social media platforms.
Progressive Brothers were named India’s Best Djs for 2012 - 2013 by VH1 Myfavdj Awards and their has been no looking back since then. They have some slick collaborations, originals, remixes lined up for release in 2014-15 and would continue to be innovative in their music. As India's finest & most energetic EDM Dj Duo, these two dance music heavyweights are ready to take on the world.