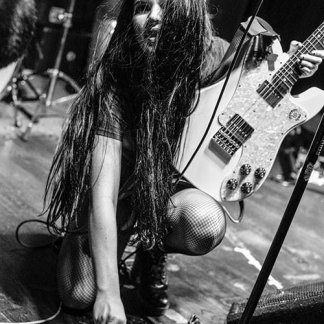 Manchester, United Kingdom
MAD
0:00
0:00
22 likes
1072 plays
Member Since: July 7, 2016
Studio Access: YES
Vocalist Fee: $110
Gender: FEMALE
Country: United Kingdom
Genres:
Sounds Like: Janis Joplin 3 Amy Winehouse 0 Lzzy Hale 0 Robert Plant 1 Gwen Stefani 0
Vocal Styles: Musical Theatre 0 Rock 2
Vocal Characteristic: High 0 Raspy 3 Rough 0 Strong 3
- 6 years experience- touring with live rock bands and as a solo artist.
- studio experience - 1 solo EP and 2 band EP's.
-songwriter - I have lots of experience writing original music - pop , folk, blues and rock.
- charts- I have been in the iTunes and amazon chart with my cover of bill withers aint no sunshine - peaking at 18 in the pop chart.
- I am a raw vocalist that specialises in grit and can scream but I am also very versatile and can sing from soft pop to musical theatre.
-recently played at the royal albert hall with my band voodoo blood.

TGC reviews - "A while back, I saw a lady play an electric guitar based solo set and I could not stop talking about it for weeks. She sang to the part of my head that has always had an obsession with 70s and 80s ladies of rock, those who broke glass ceilings with kickass guitar solos.

That lady was Kim Jennett, and along with her band Voodoo Blood, she tore the roof off The Deaf Institute. Apparently this was their first headline gig, but apart from the humble appreciation shown between songs, you would never have been able to guess.

Jennett is nothing short of a goddess, a born performer who looks as natural on stage as anyone ever has. Conveniently, her outrageously tasty guitar playing and phenomenal vocal abilities back up her performance. "

Full metal rock - "Voodoo Blood, fronted by Kim Jennett, was mesmerising from start to finish. It was almost easy to forget that there was a band behind her; Chris Norris on bass, Sean Owens on guitar, and Will Lewis on drums. Jennett delivered vocals with the power of Janice Joplin combined with ethereal movements that transfixed the audience."
MAD
0:00
0:00
22 likes
1072 plays