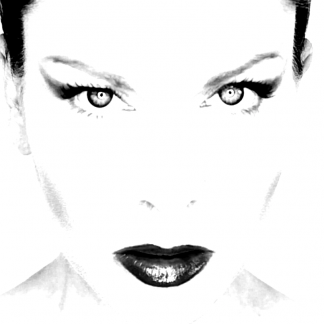 Her signature is clear but her range is wide and although Electro has been her domain for the last few years, a new sound is emerging that capitalizes on her full vocal range and speaks to a dark electronica ear.

Her release "Stars" on HAEZER's "The Wrong Kid Died" EP, was released through DIM MAK and featured on their "Greatest Hits of 2012" release. In 2013 she released the track "Starfucker" with Dizkodeath and "So Close, So Far" with Becca through Audiophile Live. She also released a co-production with Beurk! titled "Never Be Me" exclusively on Beatport with Thaf! Records.

Her biggest release of 2013 was Circe's original EP, co-produced along with "Rageface" of Rage United titled "Whoopdidoo". Released on October 14th, 2013 through SHAX TRAX. Remixes from Determinators, Hijack da Bass, Vegamoore, Trackwasher, Stuzzi Apple & Shax. This is a hard hitting EP. New collabs with Bassman, Hijack da Bass & Robopunx are on their way for good measure in Watch this space!

CIRCE first emerged onto the Electro scene with her collaboration with Haezer on "Who the Fuck is HAEZER" released in JUNE 2010 and featured remixes by Cyberpunkers (Italy), Saint Pauli (Germany), Deadbots (Ireland), Belzebass (Italy), Gehts Nog (Germany), Noise Generation (Germany) and Trump Disco (Australia). The Cyberpunkers remix made it to number 5 in the top 100 on Beatports dance chart. CIRCE can also be heard on Haezer's EP DOMINATOR feat. CIRCE signed by ONION RECORDS (Italy) with remixes by IKKI, Boomzers, Krftkds, Snap Crack and Black Dove Underground, releases on the 2nd of OCT 2010, to BEATPORT worldwide. Her collaboration with Noize Generation reached number 4 on the German Dance Charts in December, 2010. This EP titled "Get the Fuck Up feat. CIRCE, features remixes by Haezer, , Shaved Monkeys, Bobble, Beef Theatre, and Edu K. This was followed by the EP from Haezer "Here Come the Punks feat. CIRCE" released through SHAKE YOUR ASS RECORDS, featuring remixes by Drivepilot, Alienhearts, The S, The Mastertrons and Trashing Teenagers. Her collab released through Freakz Me Out Records hit it hard with The Boomzers "So Fuck You feat. CIRCE" making to number 6 on the Top 10 on Beatport. Her past release through SHAX TRAX of "Gangsta feat. CIRCE" in union with HAEZER on his MONKEY EP, hit the TOP 5 on the Beatport Electro House chart in 2012.

Look for Circe Electro online and her website under tamsinmaccarthy to explore her material further. (Vocalizr won't allow me to list links here) She collabs on a co-author 50/50 split basis only when writing lyrics and producing vocals remotely.
Into the Night
PLAY