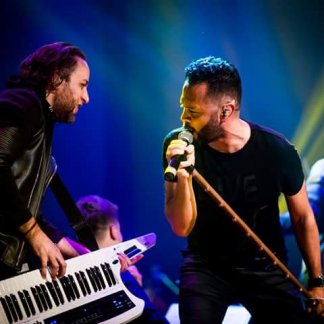 Medellín, Colombia
Pop Sample
0:00
0:00
6 likes
423 plays
EDM Pop Sample
0:00
0:00
1 like
13 plays
Latin Flow Sample
0:00
0:00
0 likes
10 plays
Member Since: May 4, 2019
Studio Access: YES
Gender: MALE
Country: Colombia
Microphone: Neumann 193
Genres: Languages:
Sounds Like: Bruno Mars 0 Post Malone 0 The Weeknd 0 Like Me 0 Sam Smith 0
Vocal Styles: A Capella 0 Rock 0 Pop Divo 0 Soulful 0
Vocal Characteristic: Deep 0 High 0 Strong 0 Crisp 0 Smooth 0
Marcel is a Colombian producer and vocalist. He was born in the city of Bogotá and moved to the city of Medellín in the late 90s. He is well-recognised on the local scene as a vocalist for personal projects such as the Synth Pop band Sweet Machines, where he was the founder, composer, writer and co-producer of singles such as Take Me Higher, My World and Veil, among others. He has participated in various tributes of the Rock and Pop scene such as the Symphonic Titan, Inside (Sting Tribute), and other projects and collaborations.
The rock genre has always been prominent in shaping his musical style. At the beginning of 2018, he separated from his band to explore a new musical direction and be seduced by the magic of the tropics and the fusion with electronic genres such as UK Bass, Trip Hop, Global Bass, Dub and Synth Wave, giving rise to a new stage as a producer and performer AKA Katchaco. His new direction seeks to fuse the retro sounds of European Synth Pop and Bass with the rhythms from the Latin American Caribbean, thus seeking a place in the Global and Tropical Bass scene.
Pop Sample
0:00
0:00
6 likes
423 plays
EDM Pop Sample
0:00
0:00
1 like
13 plays
Latin Flow Sample
0:00
0:00
0 likes
10 plays