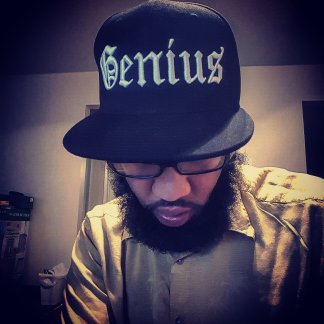 Early Life
Konsept The Genius lived in Cincinnati until he was 9 years of age. It was at that time that Konsept and his mother decided to move to Maryland due to his parents' divorce.
Konsept first lived in Langley Park, Maryland for his elementary and part of his middle school life. During the second part of his time in middle school, Konsept's mother remarried and they moved from Langley Park to Hanover, a city just outside of Baltimore. Konsept lived in Hanover for a majority of his life.

The Birth of Konsept
The emergence of Konsept was officially marked by the release of his 2009 mixtape "Way Too Outlandish." This mixtape contained songs by Terror as well as Konsept, to show the transition he went through in his life and in his music those past few years.

Straight Up Tribal
During his time as Terror, Konsept did several collaborations with the drum circle group Straight Up Tribal. The two crossed paths on the college campus of the University of Maryland Baltimore County. The group usually played outside every Friday at 12:00 noon. Konsept was walking by with a boombox blasting his music, promoting his own projects when he heard the drum circle playing music. They also had a singer singing ska reggae type songs. The singer heard the music on the boombox and liked what he heard. He approached Konsept and asked him to rap over the drums playing. Both sounds meshed perfectly. From that point on Konsept would be with them every Friday playing music. Eventually Straight Up Tribal became more than just a local campus group. They have since expanded to larger venues around the Baltimore area. Konsept still collaborates with Straight Up Tribal from time to time, but they both are so busy making music and doing shows. The influence they had on one another can be heard in their music today.

Discover Me
After the realease of "Way Too Outlandish" Konsept went right to working on his second project. In fact, Konsept planned to release multiple projects in 2011. Konsept started working on "Discover Me" in 2009. It was supposed to be a remix of Daft Punk's "Discovery" where Konsept would rap over a few of their songs. Konsept began work on this project but never completed it, due to the fact that he was working on other projects at the same time. After about a year, all of Konsept's projects were still not done. He was taking his time to make sure everything sounded just the way he wanted it to. At this point the end was not in sight. Then, Konsept had an idea: why not release on big project instead of several small ones? So, with his plans finalized and his mind made up, Konsept released his 2011 project "Discover Me" , a compilation of three projects that were set to be released in 2011. With this release, a lot of attention was paid to Konsept.

VC7
Following the release of "Discover Me," Konsept became part of the funk rock reggae band Vending C7, or VC7 for short. The band had been playing together for years already and were searching for a new sound to add to the mix. A mutual friend of Konsept's and VC7's brought Konsept to one of VC7's practices to listen to them play. The friend mentioned to the band that Konsept was a rapper, and the band was curious. Konsept jammed with VC7 that night for fun. After a few more jam sessions and a show at Ram's Head Live in Baltimore, Konsept was asked to become a permanent member of the band. While Konsept was part of VC7, they had several shows, including a show where they opened up for Slick Rick. The infusion of hip hop into the already "funkifried" sound of the band was truly poetry. After a year and a half of playing together, VC7 decided to call it quits due to creative differences and personal issues. The members of VC7 are still friends with Konsept. No plans have been made to reunite the band.

Days of Our Lives
In July of 2013, Konsept released his first EP called "Day of Our Lives." This project features fellow hip hop artist Poetik Genius. The two met in Baltimore, Maryland in mid 2011. After doing a few songs together they decided to make an EP together. This was Konsept's first non mixtape project. They also released a music video for the song "New Year," which was the single for the project. Konsept and Poetik are still friends and still work together, but there is no talk on a second collaborative EP between the two.

The Fifteens
August 2013 brought about the creation of the mixtape series "The Fifteens." The idea of this mixtape series was to release one mixtape a month for fifteen months. Konsept was able to release a total of seven volumes before being pulled away to work on yet another project. Once his current project is done, Konsept plans to return to working on "The Fifteens" to finish out the series.

Upcoming Releases
Currenly, Konsept is working on a solo project called "NerDiKon." So far he has released four singles: "Immortal," "Paper Race" featuring Poetik Genius, "Show," and "Essential Cheddar." The project is in its early stages so there is no release date set as yet. He will be doing more shows soon to start promoting this project.