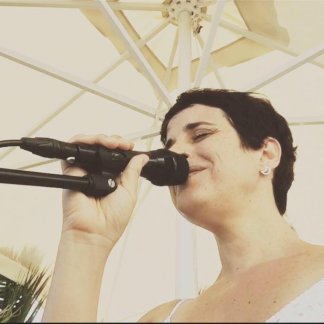 During the years in Den Haag she performs in several Clubs and Sessions as well as in Spain, Holland and around Europe, taking part in may many bands and projects. In October 2006 she reached the semifinals on Brussel’s jazz singers competition. With great feedback from the audience.

In 2007 creates the band “Matisos” since 2007. In February 2010 the band reaches the finals on Den Haag’s Mozaique Festival, broadcasted live on Television. The Band released their first Cd, “Impressions on Frederic Mompou”, in December 2010.

Since very early in her career, she’s always been interested in alternative ways of experiencing the sound and she’s been always eager to find a freer and natural way to use her voice, which allows her to experience music at its full capacity. That’s why she complemented her studies with great teacher Ingrid Voermans (Lichtenberger Technique), and learned Indian Music (Drhupad Style) with Marianne Svasek in Rotterdam. In March 2011 she decides to go deep into Dhrupad, and goes to India to study with Uday Bhawalkar.

At the moment she lives in Bonn where she teaches and creates new inspiring projects.