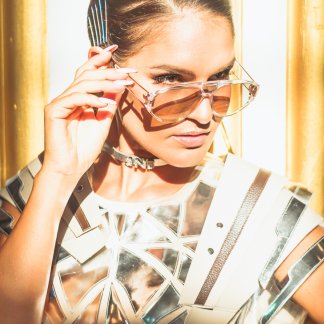 She’s been engaged with music since she was five and plays piano for 10 years. In 2006 she graduated secondary school – music class (profile) in her hometown Plovdiv.

In 2008 famous music label released their first Double Box CD with 17 was in the top of the charts in the summer of 2008.

Vessy is the best singer in the most elegant clubs and events in Bulgaria and even in Austria, Cyprus ,Germany ,Romania ,Russia ,Greece , Azerbeijan ,Romania and many others.

Hundreds of appearances, awards for best singer in Bulgaria , international radio and TV broadcastings like MTV Europe , Mad TV Greece and more , Vessy is known as one of the most talanted positive and modern style productive artists.

Her biography continues issued many singles,music albums,music videos, festivals and tours in Bulgaria and abroad.

Vessy took part in a lots of social campaigns such as: “FREE HUGS” campaign" , “Do not close your eyes" (against violence in schools), Egmont Publishing, WWF campaign (clean Bulgaria nature for one day)

I can too, Hope for the children of Haiti - BTV and Unicef. Avon campaign “With love to life” and many

Besides music albums Vesy Boneva is often chosen voice for dubbing in different movies Disney, Pixar, and various series of other large companies. She was chosen for the bulgarian songs and the voice of Little Mermaid in 2007