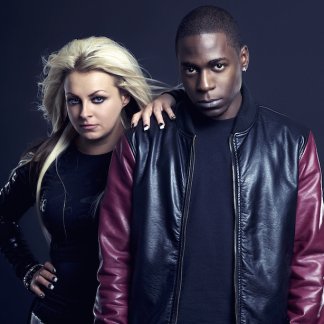 Two incredibly unique artists brought together by fate in 2013, Elle Mariachi & Jay Active of The Rhetoriks have been moving the hearts & minds of the people with their music for the past six years. With their signature style of uplifting & empowering sound unafraid to push the boundaries & borders of multiple genres in a genuinely sincere effort to create a wildly dynamic new blend of musical fusion – the talented duo create meaningful music that’s built to last with bulletproof hooks & versatile sound.

Through the insightful bars that rapper Jay brings to the mic, to the flawlessly immaculate technique & tone that Elle sings with – The Rhetoriks have become a truly unified & positive force within the scene. Based out of the UK, they’ve released multiple singles that have consistently ranked within the top-20, even reaching into the top-10 with their smash hit “Yeah I Do” – and they’ve got no plans to slow down.

The Rhetoriks have played every venue, club, festival, and show they’ve been fortunate enough to be featured onstage at – and they’re currently closing-in on the final stages of the recordings for their first official debut full-length record, called 20/20 Vision, due out towards the beginning of the new year. Ready to bring their best material to-date to the world at large – join Jay, Elle, and The Rhetoriks as they dominate the charts & playlists across the globe with stunningly unique music that becomes a powerful, sensory experience, filled with the spectacular sound of pure passion radiating from the lefts to rights.

Dj Vodka japan said...
"I am so grad to meet The Rhetoriks. The project was so exciting because of their amazing creative work!! I am looking forward to work with them again."
5 stars