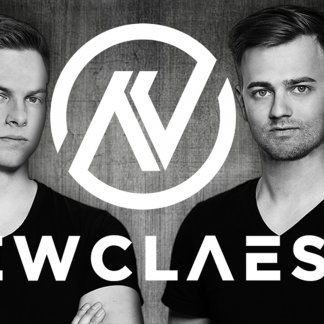 Merging their talents and skills after meeting the first time in 2008, DJs Jan and Tobias began frequenting the German club scene. Taking a 3 year hiatus to focus on producing professionally, the duo reemerged in 2015 with performances at the international Lake Faestival (AT) and Open Beatz Festival (DE) and shared the stage with Nicky Romero, R3hab and Calvin Harris.

With the release of their single “Feel Alive” on the record label Planet Punk, Newclaess caught the attention of Universal Music (SA) and went on to work with other artists on over 40 compilation projects worldwide including Future Trance on Universal Music. Ending that year on a high note, their hit single “Tonight” gained 800K streams within 3 months of its release.

Receiving tremendous support from DJs like Swanky Yunes, Juicy M among others, Newclaess toured China and propelled their career to the next level with the release of their hit single entitled “On Fire” featuring Anthony Meyer on Armada Music (Showland) which became the official Open Beatz anthem for 2017.

Building on the momentum, Newclaess teamed up with South German DJ/Producer “Cuebrick” for their 12th single titled “Fly” featuring Maliha, which gained over 600K plays on Spotify and YouTube within one week and ranked 41st on the Austrian Viral Charts. To date, “Fly” has surpassed well over 2 million plays and made it to Germany’s ‘bigFM’ radio station’s “Top Five”.
Adding to their exuberance, their track “Be The One” placed 30th on the German iTunes Dance Charts alongside artists like Alan Walker, Calvin Harris and Avicii. With over monthly listeners on Spotify, over 3 million plays on YouTube and several releases on major labels such as Universal Music, Sony Music, Armada Music & Planet Punk, Newclaess continues to spread their passion and love for music to the world.

Currently, hosting their own podcast called “Claessroom Radio” which is available on iTunes, Spotify and YouTube, Newclaess plans to release over 10 new tracks throughout 2019 that features major artists from the USA

OMZ said...
"These guys are legends in the making, was an absolute pleasure to work with them. Super talented and easy going. I strongly recommend working with Newclaess if you get the chance. 5 STARS! 100%"
5 stars