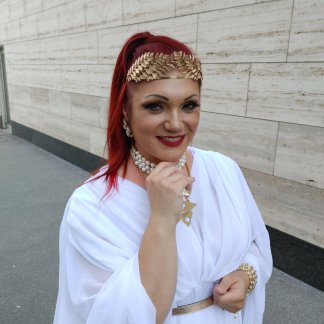 In 2014, among 10,000 registered singers from Germany, Austria and Switzerland, she was the first and only Slovene to break through among the 135 best candidates for the world-famous singing talent show, THE VOICE OF GERMANY

Among the five jurors, Maja managed to convince her favorite, Samu Haber, otherwise the singer of the world-famous Finnish band Sunrise Avenue. The fact that she managed to rank among the top 36 candidates from all over Germany, and that she had the opportunity to collaborate with world-famous musicians, fills her with pride. In Slovenia, we could hear Maja in the group Luminodoche, with whom she recorded album ‘Tobogan’, we also heard her together with Sweet Peak - with them she also recorded an excellent video for the song "Le Croissant" and blues, soul and jazz singers and pianist Uros Peric with whom they released the duet "Sweet sugar honey". She also collaborated with the band Papas, where they found a common language in soul, blues rhythms, and recorded and released the song "Vzemi vse ti dam" at Dallas Records, and recorded a video for the same song with the French team. Twice she was as a musician on a cruise ship, where she gained experience and mileage.

In 2015, she started working with the Serbian team Moonshine from Novi Sad. With the band, they released the single "You are my life", and released it at Dallas Records.

In May, she collaborated with the band The Wanted 4, with whom she recorded three songs "I want to fly", "Who is eagle now", and "I need rain" for which they also recorded a joint video.

In 2017, Maja participated as a backing vocalist at EMA, a selection of Slovenian songs for Eurovision, with singer Kataya and Duncan from Hawaii.

In 2018, Maja recorded and released the song "Smejem se" with Moonshine, for which they also recorded a nice and positive video the same year.

With the band Moonshine, she released her first self-titled album, '' Pieces '', in March 2019 at Dallas Records.

In May 2019, she was invited and confirmed by Disney to synchronize their latest film The Lion King, where she sang and dubbed two songs in Slovene, which Beyonce sings in the original.

In 2020 she released video for single Please come home for Christmas, wich she recorded in 2017 in collaboration with Denis Beganovic aka Kay Kay.

In the spring of 2021, she appeared in the mask of a nun in the show Zvezda pod masko (Masked singer) and really drew attention to her presence and top vocals, and stunned the whole of Slovenia with her performance.

In July she was invited by her good musitian friend Samuel Lucas to sing a duet at festival Melodije Morja in Sonca in Portoroz. Song is called Kdo smo and was very good exepted by the audiance. September is a new turning point for Maja, as she released the song "Voda sem,ti si dlan", which is showing the new, reborn Maja. The lyrics for the song were written by her publicist Kaly Kolonic, the English version by Bruce Smith, and the music and arrangement by Andreas Bjorkman and Adriana Pupavac.