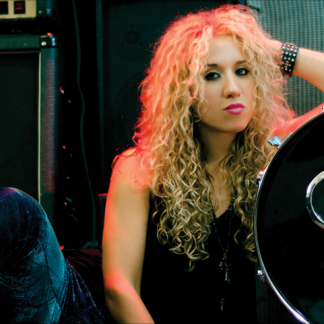 Today Electra holds a Bachelors degree in Music – Opera, and is the lead singer/co-songwriter of her original rock pop band. With her original Rock – Pop, self titled ELECTRA, they have opened up for some amazing artists such as Lita Ford, Berlin, Missing Persons, Great White, Jared Lee, Dilana, and was part of the 2010 Sunset Strip Music Festival along with Smashing Pumpkins, Slash, Neon Trees, and more, and the 2011 SSMF along with Motley Crue, Public Enemy, Bush and more. They have released an Ep “Problem Child” and their debut full length album “These Times” was released in 2015. On the album “These Times” they worked with world renowned producer Mike Plotnikoff (Papa Roach, Kelly Clarkson, Halestorm), and the album includes the song “I Can’t Breathe”, which features Phil X of Bon Jovi, on guitar and bouzouki.

Aside from sharing the stage with famous artists, and being a working session vocalist, Electra is also known for being a finalist on The Voice of Greece, Season 2.
River - Bishop Briggs - COVER
0:00
0:00
29 likes
2189 plays
LORD OF THE RINGS / CELTIC , HAUNTING FEEL . ( Untitled ) 4 years ago

Detonoma said...
"I liked working with Electra, she's a really high skilled artist! I had no idea what kind of vocal, text or melody line could fit better to my track. Electra made a nice demo very fast and it sounded like we worked together long time! Will be happy to work again ))"
5 stars
Vocalist for House music tune wanted 4 years ago