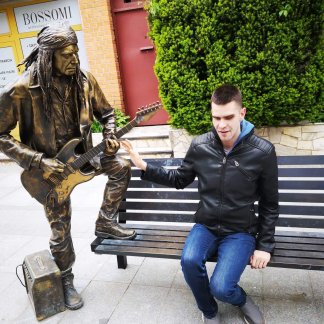 Klaipeda, Lithuania
Never stop (feat. Rita Raga)
0:00
0:00
2 likes
25 plays
Autotune voice male (Lithuania)
0:00
0:00
0 likes
7 plays
Radio comersial male and feemale (Lithuania)
0:00
0:00
0 likes
5 plays
Member Since: November 25, 2020
Studio Access: YES
Producer Fee: $150
Gender: MALE
Country: Lithuania
Genres: Languages: Hi, I'm Alex. I am from a small country Lithuania. I live with music from an early remember my childhood with a toy microphone and a cassette recorder when I was sitting in the room playing music from a cassette and talking into a toy microphone. . This was my first radio station! :)
When I started going to school, the music teacher noticed my musical skills and invited me to go to music school. After successfully joining, not only did I finish, but I did it with advanced courses, so I learned a lot of musical subtleties. My second weakness was information technology. Around 2005, when I was just 13, I started attending a special information technology club at school where I learned to manage music computer programs, that’s when my tiny childhood career began. :)
I have been working in internet radio stations since 2006. as a presenter, later as a music editor, jingles producer, and in 2012 I finally created my own internet radio station.
With Internet radio running successfully, all that was not enough for me. I wanted to have my own recording studio so that all the radio jingles would sound the way they sound on professional radio stations.

Therefore, I saved all the money earned from advertisements sold on the radio station, scholarships I received while studying and in the summer of 2015 I was able to award myself not only a bachelor's degree, but also a recording studio, which I installed in one of the rooms completely unused.
From 2015, my real work began. I started offering my audio services to various advertising agencies in Lithuania, I had to create many jingles for radio stations, a lot of commercials for various companies, and record small local music groups. Of course, the internet radio station was out of time, so it had to be shut down. But What I started doing in 2015 I can’t stop doing until now and I think I will never stop.
That is why I am here on this platform. I believe there are a lot of talented people from all over the world with whom we can make many beautiful masterpieces.
It doesn’t matter you’re a professional or a beginner, I look at every project responsibly. This job is a hobby for me, so I do it with all my heart and maximum responsibility.
Want to do something in common with me? I will be happy to listen to your ideas. Contact me by private message or Facebook Aleksas Konovas and let's discuss!